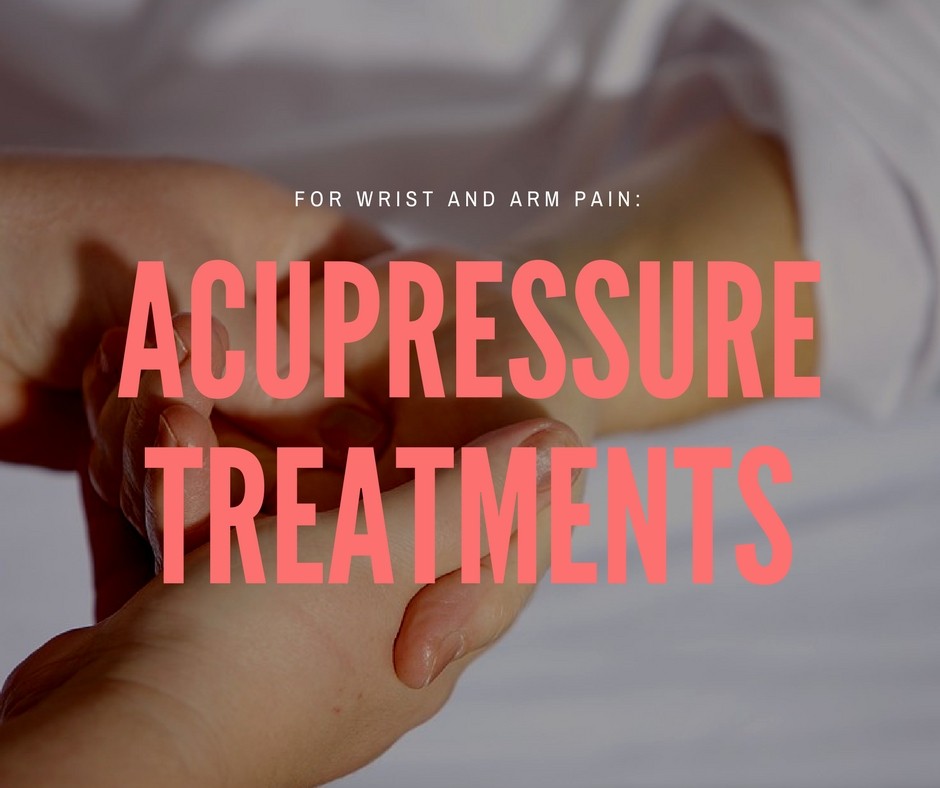 From time to time, we experience pain in the area of our wrists and arms. We often dismiss this experience and just treat it with pain relievers to reduce the discomfort.

Sure there are painkillers, ointments, and other healing wonders that take away the ailment but they only last for a brief moment.

Understanding what causes your pain is the key to treating it. Arm pain may be caused by arthritis, fractures, tennis elbow, and other similar injuries.

Your wrist, on the other hand, may be suffering from carpal tunnel syndrome or tendonitis. Whatever the cause is, the important thing is to know its source so you can treat it better and experience a long-lasting solution instead of a quick relief.

Acupressure is a tested and safe alternative for treating arm and wrist pains. The results of the procedure can be quickly felt that you‘ll be surprised how fast it can eliminate the pain. Moreover, there are no side effects from this procedure unlike when you take in painkillers or apply ointments.

What Are The Causes of Wrist Pain?

Wrist pain roots from different injuries. This is quite common to athletes who delve into sports involving a lot of arm and wrist motions like tennis, pole dancing, and gymnastics.

Here are the most common causes of wrist injuries:

Here are the acupressure points that should be triggered to relieve wrist pain:

This acupuncture and acupressure point is more commonly known as the Outer Gate. This is located on the portion of your forearm where the back of your palm is. Measure two and a half fingers from your wrist joint and look for the two large bones connecting your hands to your arms. You‘ll find the TW5 in the middle of it.

Stimulate this portion with your fingertips to relieve yourself from wrist pain and reduce the discomfort caused by tendonitis and rheumatism. The TW5 is also often tapped to boost the immunity of the body in fighting common colds and allergies.

This is located on the inner side of your forearm. You can locate it by measuring two fingers from your wrist joint. It‘s almost on the opposite side of TW5.

Stimulate this portion with your fingertips to relieve discomfort caused by carpal tunnel syndrome and even nausea. This is often triggered to help alleviate the distress caused by vomiting and motion sickness on pregnant women. This part is also tapped to treat headaches and digestive disorders.

Carpal tunnel syndrome can also cause discomfort on the neck and shoulders. You can treat them by applying pressure to your TW4.

The TW4 is located in several areas at the back of the hand: at the center, at the hollow portion between your index finger and thumb, and at the creases on your hand.

These points can help relieve ailments caused by playing tennis and pain caused by rheumatism and tendonitis. They can also be used to treat throat and ear problems.

Also called the Great Mound, this point is very effective in relieving thumb and wrist pain. It is located on the inner portion of the middle of your wrist crease, right at the bottom of your palm.

It can relieve pain caused by tendonitis, rheumatism, carpal tunnel syndrome, and other common wrist problems. It can also be used for treating hot flashes and similar discomforts that are part of post-menopausal hitches.

Also called the Arm Three Li, these three points can be located on the outer forearm. One of them is just two finger widths from the wrist crease.

The points are often used to treat elbow, wrist, and even shoulder pains. This point can also trigger healing from digestive disorders, ulcer pains, and paralysis of the upper limb areas.

Here are the most common causes of arm pain and injuries:

Athletes often involve their muscles in strenuous activities which may eventually lead to arm pains. Discomfort may range from simple stiffness or numbness to a level of unbearable pain, depending on its severity. Damaged nerve fibers, muscle tears, tissue damages, fractures, and similar injuries are caused by overusing the arms.

Here are the acupressure points that should be triggered to relieve arm pain:

This is used to treat pain caused by rheumatoid arthritis. This portion is also known as the Marsh at the Bend because of its location. It can be found on the elbow‘s sloping crease. To be exact, it‘s on the ulnar side of the brachial biceps.

Aside from arthritis, it can be used to treat gastrointestinal problems and hand tremors. It‘s also been tested to have an effect in relieving the symptoms caused by Parkinson‘s disease.

The points consisting of this group are also known as the Pool at the Bend because of their location. One of them can be found on the elbow area of the outer side of the arm.

This portion is used to treat arm pain stemming from tennis elbow complications. It‘s also used to treat fever, heat stroke, and skin diseases. It can also be used to improve blood circulation in the body.

These pressure points are located on the shoulder, midway between its top edge and the neck.

Triggering these points can help in relieving pain on the neck, arms, and shoulders. They can also be tapped to reduce nervous tension. They can also strengthen the lungs and enhance the body‘s resistance against fever and colds.

This is situated on the wrist crease, along with the lines of the thumb.

This can be triggered to relieve arm discomfort, elbow pains, and wrist pains running along the meridian. It can also be tapped to treat asthma, palpitations, cough, and breathing issues.

These points are located on the shoulders and are said to be effective for treating arm pains. To be exact, they‘re in the hollow area below the scapula and directly above the joints in the arms.

Applying correct pressure on these points can help relieve arm numbness and stiffness. It can also correct the issues that make a person unable to properly lift their arms up.

Acupressure is a good alternative to relieve pain in the arms and wrists. It can provide a longer and lasting relief from muscle pains compared to pharmaceutical drugs that give temporary solutions.

Whether you want to try an approach that‘s more natural or you‘re allergic to painkillers, acupressure is one of the safest alternatives you can consider.

Disclaimer: this article is for educational and entertainment purposes only and should only be used at the reader’s own risk. Please consult a fitness and or medical professional (doctor) for any questions and answers you may have.

Get all the latest and exclusive news and the occasional deals

????SIGN ME UP FAM ❤️ We HATE SPAM. If you ever hear from us, it will be about something amazing. Thats our promise to you